“ Saturday 6th June, 2020 - The Official Guinness World Records title attempted - Worlds Largest Virtual Dip - Most photos of people in water uploaded to Facebook in one hour- we made it – with entrants from all over Ireland.  And we have already raised over €85,000 – money still pouring in”  – said Dee Featherstone, organiser!

The song – The Path that chooses you - accompanying this montage, was written by Ollie Cole, Meath songwriter,  for the Sea of Change Choir and produced by Virtual Choir Music Director, Ian Brabazon. Over 400 voices recorded virtually from peoples home and mixed to one beautiful song, with our virtual dip pics from today included!  Incredible!   It all happened this week, culminating in today’s World Record Attempt!

Yes everyone. They did it.  We did.... www.virtualdip.ie has achieved an official Guinness Book of Records attempt today!  Incredible and thanks to all who took part.   The link is above – with sound track – from today’s Virtual Dip! 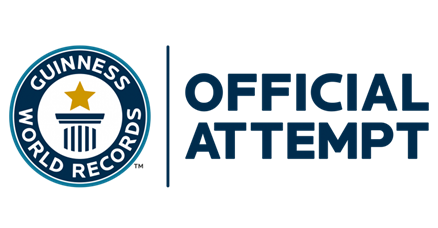 Childhood Cancer Never Stops and neither do we!

So. We attempted  our Second Guinness World Records title  - this time for The World’ s Largest Virtual Dip - the record is Most photos of people in water uploaded to Facebook in one hour - on today, Saturday 6th June 2020!    This year no need to go naked-  togs or bikinis and inventive pictures were the order of the day.

The challenge was  for all ladies to take a Virtual Dip – in your togs– even in groups of 4 - to raise funds for Aoibheann’s Pink Tie.  In the Bath, Shower, Paddling Pool, Beach  – whatever suits! Then upload your picture to our Facebook Event Page between 2pm and 3pm.  The photos were added up to see how many were uploaded in an hour.  All photos will be part of a big Online Mosaic as well a picture of the Largest Virtual Dip.  We aimed  for a fun morning in this “not so fun” time.

And we have already hit a fund-raising figure  of over €85,000 – way above our expectations for this year!

The Official Guinness World Records title attempted: Worlds Largest Virtual Dip - Most photos of people in water uploaded to Facebook in one hour

To date Strip and Dip have raised €780,000 for Childhood Cancer and purchased a House for Children’s Cancer Charity – and today is expected to raise over €75,000 – for www.aoibheannspinktie.ie

Strip and Dip also broke an official Guinness World Records title in 2018 for the World’s Largest Skinny Dip with 2505 ladies in attending.

Said Dee Featherstone” This is the 7th Strip and Dip to be held. BUT, because of the Covid-19 crisis in relation to travel restrictions, etc. this year we have to go Virtual! But that did not stop us!. The Strip and Dip started seven years ago.  I was undergoing treatment for aggressive breast cancer and had a brainwave after my mastectomy to do something fun – and raise money for childhood cancer! The event itself has grown from 50 women in Year 1, to 2,500 women in Year 6 – a huge achievement.   As well as raising over €780,000 in total was a major achievement. This year we were going for a virtual Guinness World Records title attempt for the Largest Virtual Dip with the title Most photos of people in water uploaded to Facebook in one hour. And we are delighted to now confirm we have just got it!”

How Can We Help?

See What Our Clients Think

Give Us A Call Here