Children’s charity Hugh’s House writes letter to Santa in hopes he will be extra generous this year!

Hugh’s House is a Dublin charity which provides free accommodation to families who have critically ill children in city centre children’s and maternity hospitals.  CEO Ade Stack and the team at Hugh’s House have written and released their letter to Santa, setting out the items and services they are in desperate need of this festive season.

Hugh’s House was founded by Ade Stack and her partner Marty Curley after the death of their 8 month old baby Hugh, who was born in December 2012 and spent all of his 247 days of life in hospital. It was this experience and the other families they met while Hugh was in Temple Street Hospital that inspired them to honour Hugh’s life in a truly meaningful way.

Ade and Marty were shocked at the number of parents sleeping on floor or on plastic chairs in the hospital due to the fact that they were from outside Dublin and, in many cases, could not afford a city centre hotel and literally had nowhere else to stay.  “Hugh shared a room with a little boy who, in the six weeks he was there, got 2 visits we saw from his mother and we felt that was just something that shouldn’t be. It wasn’t because Hugh died that we were looking for a house, it was because Hugh lived and we met all these other families that we said there must be somewhere for them to go!” says Ade.

Ade and Marty now run 2 houses on Belvedere Place with a total of 14 rooms, mostly ensuite. These rooms are provided to families from outside of Dublin who have children that are long-term in patients of Temple Street, or have premature babies in Rotunda, Coombe and Holles Street hospitals. “I am very proud of being a Dubliner and I hated that people visiting Dublin associated it with a lack of hospitality, a lack of care and that there was nowhere for them to go. I think in a strange way, particularly at Christmas, it really upset me!” Ade continued “Two thousand years after there was no room at the inn, that Christmas there was still no room at the inn.”

Hugh’s House and their staff now provide a home away from home for these families, supplying them with secure accommodation, nutritious meals and unending support during the most difficult journey of their lives. Over the pandemic, they only got busier and were at full capacity most of the time, especially as hotels closed and other options for such families were few and far between. With this in mind, Hugh’s House would like to release their Santa Letter to the public this year, which details just a few of the things they would like for Christmas, in the hopes that Santa, the elves and the Irish public will be extra generous this year! 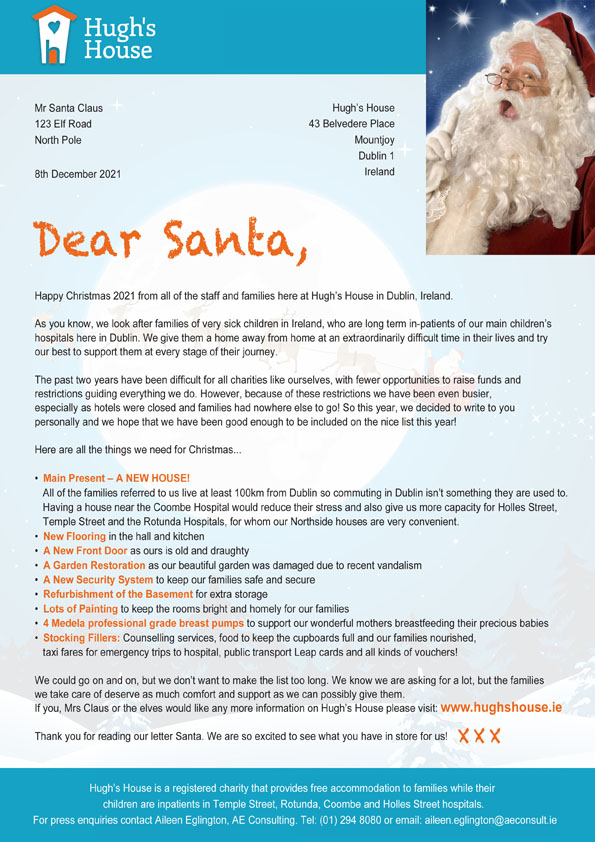 If you or your company would like to find out more about Hugh House and how you can help, please visit www.HughsHouse.ie. There are so many ways you can make a difference to families who are struggling this Christmas!

How Can We Help?

See What Our Clients Think

Give Us A Call Here